Like gravity, understanding the nature of magnetic forces has been an elusive notion, once again, because of a misunderstanding of their origins.

A magnet works with Cosmospheric Energy waves similar to how a vacuum cleaner’s fan works with air. A powerful fan causes a pressure imbalance, sucking air in one end and forcefully expelling in out the other.

Naming one end of a magnet north (N) and the other end south (S) is misleading. The better terminology would be to call one end intake (I) and the other output (O). Magnets suck Cosmospheric Energy into the intake (I) pole and expel that energy through the output (O) pole. 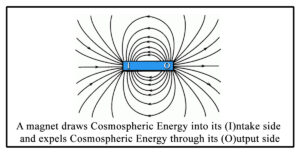 Magnets behave in such a way as to deflect, direct, and align Cosmospheric Energy. Magnets themselves do not generate the energy required to produce magnetic forces. This explains why magnets can seemingly produce perpetual force without significant degradation of their strength. The energy comes from outside the magnets.

It is simply an illusion that motion-producing forces come from the magnets themselves. Magnets direct certain types of Cosmospheric Energy to create their magnetic fields, but an actual force only occurs when magnetic fields interact with other objects of matter. The energy flows through the magnet, but without another potentially magnetic object nearby, no actual force ever occurs.

When opposite poles of two magnets approach each other, an attractive force occurs. The closer the magnets are to each other, the stronger the attractive force. The feeling of this phenomenon is similar to aiming a water nozzle at a vacuum hose. In fact, it is Cosmospheric Energy rushing through the end of one magnet and getting sucked into the other magnet, creating mutually attractive forces upon the magnets. 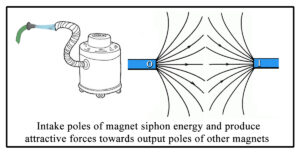 Certain materials, such as iron, are considered magnetic. These materials do not channel Cosmospheric Energy, but under the influence of a magnetic field, these materials become magnets. 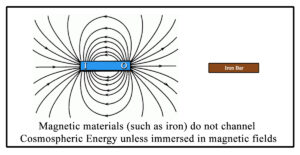 When a piece of iron is located near a magnet, it is immersed in the flow of Cosmospheric Energy through the magnet. This immersion temporarily transforms the iron into a secondary magnet itself, in which the energy flows in the same direction as the primary magnet. 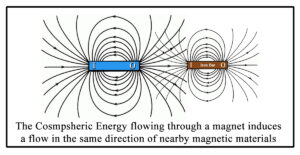 Because the flow induced in the magnetic material is the same direction as the primary magnet, the poles of the magnets are oriented with opposing poles nearby, in which Cosmospheric Energy is rushing through the end of one magnet and getting sucked into the other magnet, creating mutual attractive forces upon the objects.

The resulting attractive forces cause an acceleration of the two objects towards each other and they connect to form a single larger magnet. 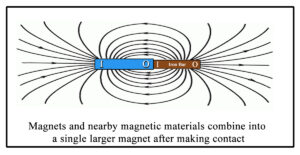 A deflection of Cosmospheric Energy also occurs in the case of an electric current running through a conductor (such as copper and silver). When an electric current is flowing, the conductor behaves in a way similar to magnets: that is, energy is being pulled from one side and emitted from the other.

When conductive material has no current, Cosmospheric waves passing nearby are unaffected by the material. 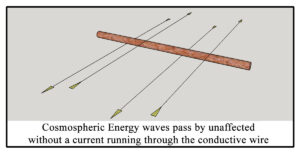 As soon as an electric current begins to flow through the conductor, the conductor behaves as a magnet with the ability to deflect and direct Cosmospheric Energy waves passing nearby. 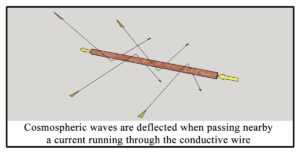 Like everything else in the universe, the conductive material is being bombarded by Cosmospheric Energy from all directions and angles of approach. All of those passing nearby the electric current are deflected and continue along a new trajectory after passing by the influence of the electric current. 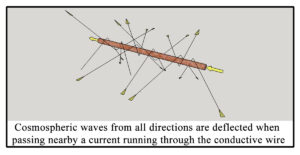 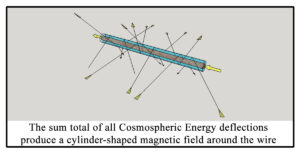 In essence, the term magnetic force is somewhat misleading, suggesting that the force is created by magnets. Force is never directly produced by a magnet. Magnets create fields of condensed and aligned Cosmospheric Energy waves, which can in turn exert influence as force upon another object. If a magnet can be thought of as a siphon, sucking fluid in one end and rushing fluid out of the other, no force occurs until the fluid impacts other matter. Physical reactions (forces producing accelerations) only occur when the directed energy encounters matter sensitive to such type of energy, namely magnetic and conductive materials. 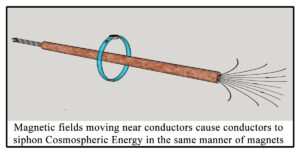