As shown in Part III, gravity’s singularly attractive nature is merely an illusion. Because of the previously widespread misunderstood origins of gravitational and magnetic forces, understanding the expanding and accelerating universe has been hindered by the same error in its foundation. False assumptions obscured a simple truth, to such a degree that complex theoretical principles had to be devised to attempt to account for these mistakes: dark matter and dark energy.

Although dark matter and dark energy are very popular and interesting-sounding ideas, neither exists in reality. Not a shred of evidence has been found for their existence. They simply represent catch-all theoretical notions and mathematical necessities to account for and support a terribly mistaken foundation about gravity. These terms are used to describe matter and energy we cannot sense, but needed to account for the expanding and accelerating universe in defiance of the singularly attractive nature of gravity.

If gravity was an attractive force created by matter, then the universe would be contracting. Because the universe is seemingly expanding in all directions, the notions of dark matter and dark energy were invented to resolve this paradox. But gravity is not a pulling force. Gravity is the resulting pushing force when objects of matter obstruct Cosmospheric Energy from each other.

In order to explain the accelerating expansion of the universe, the explanation of inertia from Part II of this presentation must be revisited and elaborated.

Somewhere in the universe is the effective Cosmospheric center. At this point in space, the bombardment of all Cosmospheric Energy waves is perfectly equal in all directions. This is the only location with absolute inertia. The location is not necessarily and not likely the point equidistant from all boundaries of the universe, but rather the place where all energy is equally balanced from all directions. This locale is constantly shifting, as all other matter is pushed away from this point, thus changing the location of the effective center. 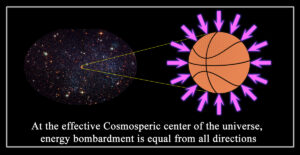 Everywhere else in the universe is off-center. This means that the Cosmospheric Energy bombardment is not equal from all directions, causing outward drift. The farther away an object is from the center, the greater the lopsidedness of the energy impact, and the greater the force (and acceleration) pushing the object outwards. 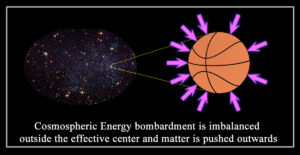 At the very edge of the universe, there is no Cosmospheric Energy at all impacting one side of the objects located there. With no opposing energy, the outward acceleration in this boundary zone is greatest. 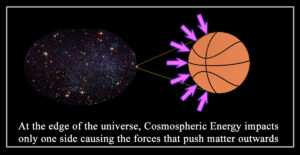 Outside of the effective center, there is no absolute inertia. There is only relative inertia, meaning objects and their neighbors are drifting relatively equally so they seem to possess absolute inertia. This is the reason why we can’t detect this imbalance. Everything in our neighborhood (our solar system particularly) is drifting outward equally, more or less, from the effective center.