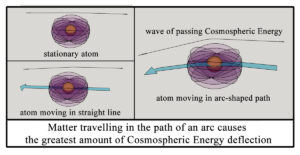 Until now, the causes of a number of common phenomena involving rotating bodies have never been adequately explained. The simple mysterious stability of a spinning toy top holds the same secret answer that explains why our galaxy is disk-shaped.

A toy top is a type of gyroscope. A gyroscope’s stability, or resistance to toppling, occurs only when in a spinning motion. Without the spinning, it falls over like any other object because of gravity. While spinning, it resists gravitational forces and keeps itself upright. How?

The matter along the equator of the gyroscope is moving through space in the path of an arc, maximizing its ability to deflect some of the persistent Cosmospheric Energy passing along. Waves passing within or at a sharp angle to the plane of the gyroscope’s equator are deflected, and the aggregation of these deflected energy waves creates a rotating ring-shaped field of energy called the Ring Field.

A spinning object is not in a state of inertia. In addition to the normal omnidirectional bombardment of Cosmospheric Energy, there is an additional field of energy around the plane of its equator. This additional field, the Ring Field, is produced by Cosmospheric waves which would normally have passed by the object unaffected if the object was not spinning. 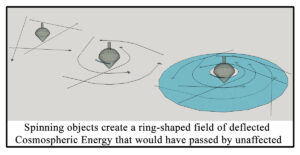 In addition, Cosmospheric Energy waves passing through the spinning object at or within a sharp angle of the equatorial plane become deflected outward radially. The aggregation of these outward energy projections produces the Disk Field, a disk-shaped field of energy emanating from the axis and overlaying the ring-field. The Disk Field is the field of energy that creates centrifugal force. 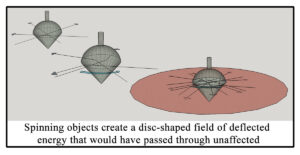 Any external force applied to a spinning object will encounter resistance from the object, unless the force is applied along the plane of its equator. Additional external force is needed to overcome the dual forces provided by the Ring and Disk energy fields created by the Cosmospheric Energy deflected by the object’s rotation.

In the case of the toy top, as long as it’s spinning fast enough, the external force of gravity is not strong enough to overcome the forces along the plane of its equator and the top remains upright. 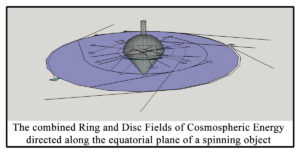 The same field that keeps gyroscopes upright causes rings to form around some planets. There are no theories in classical mechanics that explains the existence of planetary rings. Particles of matter orbiting a planet would form a uniform spherical pattern, and would indeed do so if the planet were not spinning. 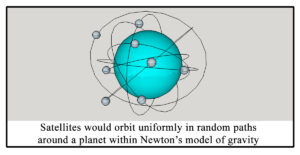 However because planets rotate, additional fields of energy are created on and around the plane of their equators. Particles, asteroids, and satellites are driven onto and held along the equatorial plane by the deflected Cosmospheric Energy producing the forces which bind them within that plane and help them remain in orbit. 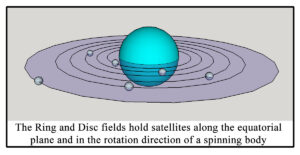 Expanding in scale outwards, the same principle explains the disc shape of our solar system and the disk shape of our galaxy. The universe itself is probably disk shaped but it’s certainly too soon to tell.