Part VI - The Origins of Matter

Einstein popularized the belief that matter and energy are convertible through his iconic equation E=mc2, where E represents the total energy contained in any given matter’s mass m, and vice-versa. In the decades that followed, scientists became well-practiced in converting matter into energy through nuclear fission, transforming particles of matter into pure heat and light, mostly for the purposes of electricity production and mass murder.

Those applications of his idea were of much greater practical utility in society than the opposite: creating matter from pure energy. Much has been studied but little has been understood about this process. For the sake of explaining this theory, I will continue to use the generic term energy to express these ideas in the most straightforward way, reminding the reader that energy includes all types of energy that are both known and yet to be discovered – heat, light, dark or otherwise.

What is energy? Energy is everything. It is the distinction, as far as we’re concerned, between somethingness and nothingness. Energy’s ability to interact and influence other forms of energy, and its ability to create forces which cause motion, are the distinct properties that enable us to sense its existence. There may be many other secret ingredients of the universe, inert or otherwise, but energy comprises everything that exists and is relevant to us, outside of theoretical or philosophical ideologies.

For example, our sun emits some of its energy in wavelengths visible to humans. This energy is unbound Free Energy during its journey from the sun to the Earth. When those waves impact a rose on the surface of the planet, some of those waves are absorbed by the atoms of the flower’s petals and become entrapped in Bound Energy. Some waves are not absorbed, but instead reflected back as Free Energy. Those that happen to reach our eyes are absorbed and incorporated into the Bound Energy of our retina atoms, causing a perception in our mind of the color red. Every time you look at a star in the night sky, your body absorbs some of its energy at a distance billions of kilometers from its origin.

Bound Energy, at its most elementary level, is composed of Free Energy waves trapped under the influence of each other. We call these entities of Bound Energy particles. The tiniest particle forms when three or more energy waves encounter each other, with such timing and trajectory that they become trapped in orbit of each other.

This occurrence happens because Free Energy waves can cause deflections of other Free Energy waves passing nearby. By definition, waves are oscillations and therefore polar in nature. Polarity of energy is the root phenomenon that causes the attraction and repulsion which makes all force, and thus all motion, possible.

To help visualize the natural formation of energy into matter, imagine a table with a person at each end holding a magnet. Each person rolls their magnet towards the other simultaneously. If there is enough distance between the magnets, they will each roll along their original linear trajectory unaltered. 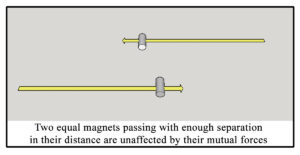 However, if the magnets are at close enough distance from each other, each magnet affects the trajectory of the other and both become deflected along curved paths. 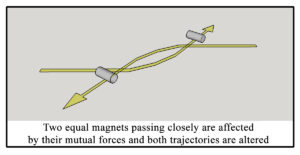 If the magnets are very close to each during their passing, they connect and begin spinning. If not for their friction against the air and the table, they would spin perpetually. 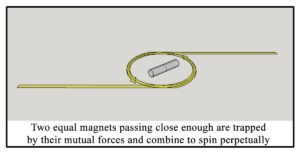 This process is exactly how nature transforms Free Energy waves into particles of Bound Energy. When three or more waves approach and orbit one another, they form a Bead of Matter – the tiniest “particle” of matter possible. 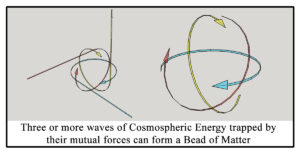 Given the vastness of the universe and the abundance of Free Energy, the natural process of Bead formation happens countless times every moment throughout space. Most Beads that ever form are unstable and instantly dissolve by their own slight misalignment of energy waves and/or deflection from other passing waves.

However some Beads are stable, meaning that the alignment of the trapped waves is in such near-perfect formation (or at least adequate enough) to trap and bind other waves passing by and incorporating them into its structure. Through accretion, Beads grow into larger, very stable, subatomic particles. 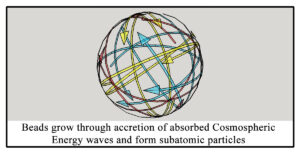 The manner in which Beads are formed determine the types of subatomic particles. For instance, Beads formed with energy waves aligned such that most of its positive poles are oriented on the inside edge of their curvature will result in particle with an overall negative exterior polarity. Those formed oppositely, with negative poles predominantly on the inside track, will result in an overall positive exterior polarity. Opposite Beads will attract and similar Beads will repel, all in accordance with the elementary polar nature of the waves that comprise them. Some subatomic particles, as we know them, may in fact be bundles of Beads.

Beads continually absorb and emit Free Energy waves. When a wave approaches at the right angle, it may be absorbed. The interaction of other nearby Free or Bound forms of energy can cause Beads to shed Free Energy waves. Furthermore, Beads which have grown to the size of subatomic particles can be thought of as saturated and are therefore always shedding waves to some degree or another. The measurement of the amount of Free Energy emitted by any quantity of matter at any particular moment is what we call temperature.