According to Einstein’s Theory of Relativity, nothing of mass can reach or exceed the speed of light. His reasoning, which was deduced mathematically and entirely without actual evidence, was that the faster matter travels, the more its mass increases. As its mass increases, more force is needed to accelerate the object to faster speeds.

Whether or not an object of matter can reach or exceed the speed of light has yet to be proven or disproven, but in any case, Einstein’s understanding was sabotaged by Newton’s false assumptions about gravity. Einstein needed to work out a fantastically complex, counter-intuitive model of the universe that is nearly impossible for many to understand and often impossible for experts to explain clearly.

The reason that objects of matter can’t reach or exceed the speed of light is actually quite simple, given this new understanding of Cosmospheric Energy and its resulting forces on objects of matter. The problem is the same as in any other method of locomotion we’ve devised: the problem is drag.

Airplanes and automobiles can only go so fast because as their speed increases, the more air needs to be displaced, requiring ever-increasing thrust to accelerate the craft to higher speeds. In a boat, water provides the same resistance. This resistance is known as drag – the force that opposes thrust caused by an object of mass moving through a medium.

When an object in space is relatively still or travelling with a low velocity (nowhere near the speed of light), the Cosmospheric Energy bombardment is more-or-less equal from all directions, as long as the object is not near the outskirts of the universe (see Part VII – Universal Expansion). 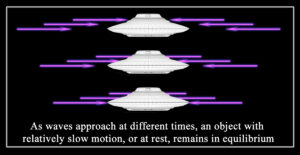 On its leading side, the object encounters more waves because it is catching up to waves that would have taken longer to impact if the object was slower or stationary. At the same time, it is outrunning waves on its trailing side that would have already impacted. 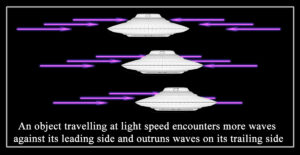 It may be possible, however, to devise a system that could deflect and/or reflect Cosmospheric Energy waves, preventing this energy from impacting a spacecraft on its leading side. Such a system could reduce the drag effect in similar fashion that automobiles, airplanes, and boats are designed with streamlined fuselages, and enable vessels to potentially exceed the speed of light. 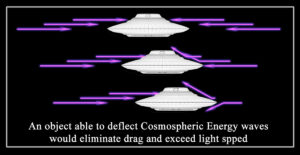 The successful engineering of this system would be unquestionably the most triumphant achievement in all of human history.